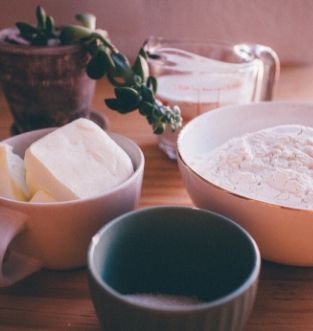 Bake your own hot cross buns

Grab everything you need at Chatswood Interchange

Hot cross buns. Is there anything better than a warmed up hot cross bun slathered generously in butter? And of course, you can grab some hot cross buns ready to toast and eat at Woolworths, but baking your own is an easy and enormously satisfying weekend project. Making your own is also a great way to customise your hot cross bun recipe to suit your own tastes. Don’t like preserved orange peel? Leave it out! Love your buns heavy on the currants? Bump up the amount. Plus, you’ll fill your house with toasty and absolutely mouth-watering baking smells. And as autumn descends and the days get a bit of a chill, baking is a great way to warm your home up a bit without resorting to turning on the heating.

For many of us, hot cross buns are the quintessential food associated with Easter. But what’s the history behind them? Once reserved only for Good Friday (but now available for months in the lead up to Easter), hot cross buns are traditionally a yeasted sweet bun, lightly spiced, filled with dried fruit, and have a cross piped on the top. One possible story for the origin of hot cross buns is that an Anglican monk in the 12th century baked the buns and marked them with a cross in honour of Good Friday. Over 700 years later, it’s a tradition that we’re happy to uphold, whether that’s for religious associations or just simply because they are delicious!

So, what do you need for the best home-made hot cross buns ever?

If you don’t already have a favourite recipe, here’s a good traditional hot cross bun recipe from Woolworths. You’ll need about 40 minutes for preparation time, including letting the dough rise and another 15 minutes baking time. OK, get your mouse ready and let’s head to the Woolworths baking aisle online! You’re going to need:

You’ll also need some cold items too, so it’s time to head to the chilled section for:

What about non-traditional options?

You can also mix up the dried fruit you use in a traditional recipe – just chop things into the same kind of size as sultanas and keep the total weight of fruit around the same. You could play around with dried apple, dried blueberries, cranberries, dried apricots and more to create your own perfect hot cross bun recipe. And for the really non-traditional among you, you can enjoy all the flavours of hot cross buns in other formats. Options include:
– Hot cross bun smoothie
– Hot cross bun tea – both a green tea base and black tea base

Toasted and slathered in butter? Dipped in a cup of tea? Sneakily eaten in the kitchen out of sight of your kids? Let us know how you like your hot cross buns and if you’re a strictly traditional bun fan or if you’re more into some of the non-traditional flavour combinations.

Or maybe you know the secret location of Chatswood’s best, out of this world hot cross buns. If so, tell us where!