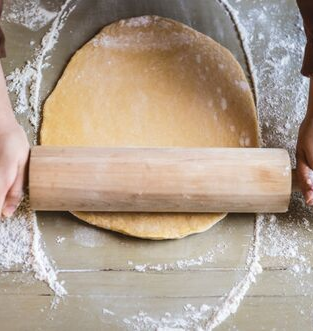 Cooking with Kids! School Holiday fun in the kitchen

Stuck on what to do when the kids say ‘I’m boredddd’ for the 465 th time? Never fear because we have some super simple yet scrumptious recipes that will have your munchkins engaged and entertained in the kitchen and bonus, they’ll be able to eat their creations too! Entertained kids + Full tummies = Happy Mummies! Grab your mixing bowls and wooden spoons because meal prep just got a whole lot more fun with these easy peasy recipes that everyone can have a go at.

Vegemite Scrolls
It’s safe to say that most kids love Vegemite in this country and it’s no surprise why with its salty yet slightly sweet taste. And what’s better than Vegemite you ask? Vegemite and cheese of course! With only 4 ingredients, these scrolls not only make for an easy snack but are cost effective and super fun to make!

What you’ll need:
Puff pastry sheets (frozen)
A tablespoon or so of melted butter (for brushing)
Grated Tasty Cheese
Vegemite

Simply thinly spread Vegemite over an entire sheet of par frozen pastry, sprinkle with cheese, roll into a long roll and cut into bite size pieces. Place each on a baking tray lined with baking paper upright (so you can see the Vegemite swirl). Brush the top of each with melted butter and cook in the oven on 180 degrees until the scrolls are puffed up and golden brown. Devour!

Mini Pizzas
The great thing about these is that you can buy pre made mini pizza bases, meaning less fuss and faffing about! Choose your favourite toppings (we love ham and cheese and cherry tomatoes) and let your kids create their own mini pizzas with minimal mess! Tip: Choose a variety of coloured cherry tomatoes to make your pizzas bright and fun!

What you’ll need:
Mini Pizza Bases
Tomato Paste
Grated Cheese
Sliced Ham
Cherry tomatoes
Simply spread a thin layer of tomato paste on each mini base and add your toppings. Bake in 180 degree oven until the bases are golden and crispy and the cheese is mouth-wateringly melty. Easy and delicious!

Ice cream in a bag!
Yes you read that right! You don’t need an ice cream making machine to make your very own creamy ice cream within just 15 minutes! Your little scientists will love watching the creamy concoction turn to ice cream before their very eyes!

What you’ll need
1/4 cup of cream
¼ cup of milk
½ teaspoon of vanilla
¼ cup Rock salt
2 cups of ice
Ziplock bags
Your chosen flavourings or toppings (we love it made with Milo!)

Add cream, milk, vanilla and your chosen flavouring in a zip lock bag and seal. With a second zip lock bag, place the salt and ice in it and then place the bag with the ice cream mixture into the second bag creating a layering effect. Then… shake, shake and shake some more (for about 10 mins or so) until ice cream is magically formed! Grab a spoon and eat it straight from your very own portion sized bag! Simple, yet so fun to make! Head on over to Woolworths to stock up on these ingredients before the school holidays hit. Rainy day activities sorted!