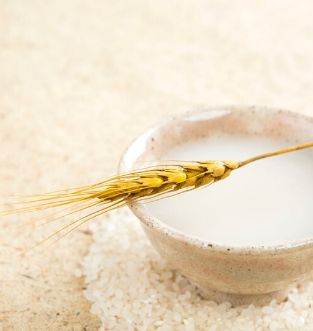 Mak-ge..what? Although the sound suggests it may be some sort of pasta dish, it couldn’t be further away from its rolling Italian sounding name. Makgeolli (pronounced MAHK-oh-lee) is a Korean alcoholic beverage that we’ve seen popping up in bars across the globe recently, and while it’s not a ‘new’ brew in any sense (it’s actually centuries old) its making waves and we’re keen to learn exactly what this elixir is and why its gaining popularity and is totally trending in 2020.

Upon researching this century old beverage we discovered that Makgeolli also known as ‘nongju’ meaning ‘farmers liquor’ and is an unfiltered grain alcohol which is brewed to around 6% to 8% alcohol content and it is a traditional Korean sparkling rice wine …remarkably, rice is its primary source of sugar! The taste is said to be a mix between Sake and kombucha and it has a silky, creamy and milky texture. Makgeolli used to be the most consumed alcohol in Korea however the popularity of the drink diminished over time as it was considered the ‘drink of the peasants’ and beer became the go-to fav.

But guess who’s back in town, and is climbing the popularity charts once again served in uber cool bars, and quirky mixologists have re discovered its awesomeness and are creating intriguing elixirs with this century old brew and although it is still considered inexpensive, its sweet yet sour profile and lightly sparkling effervescent features are still deliciously appealing. Not only does this sparkling rice wine taste delish, it actually is said to have health benefits! Say what! Yep, you heard us! Compared to other alcoholic beverages, Makgeolli contains high concentrations of nutrients and organic acids and contains vitamin B & C and is said to have antioxidant properties. An alcoholic beverage that could actually benefit our health? We’ll cheers to that.