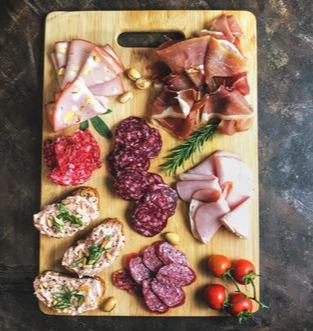 Salami smarts – knowing your sopressa from your cacciatore

Who knew this cured meat had a celebratory day all to itself and for any meat lover you’ll agree that Salami is totally something worth celebrating! There’s nothing quite like a moreish mouthful of cheese and a crispy cracker filled flavoursome salami, and globally on September 7 th the world celebrated this moreish meat as it was International Salami Day! Salami is a type of sausage that’s been cured, fermented and then air dried and it’s this process that makes these sausages super packed with layers of delicious flavours. Back in the day, Salami was a staple among Southern European peasants due to the fact it could be stored at room temperature (remember, there we’re no fridges back then) and would last between 30-40 days after it had been cut! Salami also contains quite a bit of fat which is another reason why these sausages are able to stay preserved for a considerable amount of time (and also why they taste so darn delicious).

True Salami is air dried and not smoked like its siblings chorizo and pepperoni which means that its unique flavour is mostly derived from the actual ingredients within rather than from the process in which its made. Ingredients often include pork and sometimes beef, white pepper, salt, garlic, vinegar, wine and a dash of chilli for a bit of a kick and is then put in a thin casing (often made out of cleaned animal intestines) and left to air dry for weeks, months or even years!There are many different variations of Salami and each have unique cultural flavour profiles depending on the origin they come from. Here are a few of our favourites for you to try at your next wine night with friends.

Soppressata
Most commonly made with pork, this type of salami is higher in fat than others and have a rather rustic appearance when in full sausage form and includes ingredients such as spicy black pepper and chilli peppers. Part of the creation process includes being the sausages being pressed with heavy weights which essentially means it loses around 30% of its weight which in turn, intensifies the flavour. Clever!

Cacciatore
This is a typical Italian salami which was a common pocket-sized snack taken out when hunting and gathering. With its high fat content and snack-to-go sizing, this little pocket rocket made for a quick bite to eat on the run. Due to its pint sized nature, the curing process only takes around two weeks before its ready to eat.

Ciauscolo
Made from pork meat including fat from the shoulder or belly, this salami is spiced with black pepper and seasoned with garlic. Its distinct flavour comes from Italian mulled wine that’s often added as well as the fact that its cold- smoked over juniper branches for two days before being hung up to cure. Casciola is an incredibly soft salami that is actually spreadable and is a similar consistency to pate. Spread some on a crusty piece of bread for a truly heavenly taste sensation!

Napolitano
Not to be confused with its close and similar looking relative American Pepperoni, Napolitano salami is compact, small in diameter and its spicy with a red appearance.. and although made with some fat, this sausage is on the leaner side when it comes to salami as its made from lean pork. These sausages are folded, tied and knotted together and are then dried out for a maximum of 6 months.

Continue the celebration of this delicious cured meat and head over to Stretch Italian with a bunch of friends and taste some of their delicious salami selections on their grazing boards and pizzas!