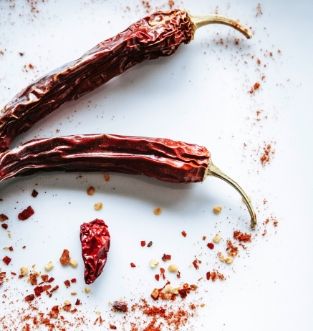 Tajin – The magical seasoning you never knew you needed!

Have you ever just longed for a single seasoning that you could sprinkle on almost anything for optimum deliciousness? Well you’re in luck because we’ve discovered a magical concoction that originated in Mexico and has finally reached our shores… and let’s just say right now we are obsessed (and we think you will be too). But what exactly is in this memorising mix?

This story begins in a large, traditional Mexican kitchen where the luscious fragrances of fresh ingredients are lovingly combined by grandmothers create their best recipes by, coaxing delectable flavours from stove burners and clay pots. Horacio, the founder of Tajin was a mere boy when his grandmother, would skilfully combine seven different chilli varieties to prepare her signature sauce. The frequent exclamation “Mama Necha made her sauce!” was enough to bring the family scurrying to the table. One of Horacio’s most beloved childhood memories was putting her sauce on fresh corn-on- the-cob. One day, as he delighted in the way the sauce ran down the sides of his corn cob he thought how wonderful it would be if there were a way for the whole world to taste this sauce.

From that moment of inspiration he was determined to develop a process to dehydrate the limes and the chilli that would preserve their flavour. Without knowing it he had embarked on creating one of the most enjoyed sauces favoured by Mexicans. While visiting the state of Veracruz Horacio found himself at the Tajin archaeological site and was struck by the impressive ancient buildings so iconic to Mexican culture. When he became aware that the word “AJI” means chilli in the Nahuatl language he decided to call his sauce “Tajin”. The year was 1985. In 1993 Tajin entered the U.S. market and is currently sold around the world, recognised as a pioneer in the powdered sauce category.

This distinction is not solely for its unique flavour and undeniable quality but also for its universally celebrated dedication to promoting family values and Mexican traditions. What started in a family kitchen was shaped by the imagination of a visionary and creative entrepreneur who could make his dream come true. His creation delights everyone, brings families together and improves the flavour of everything it touches. We LOVE Tajin and we know you will too! The only problem you’ll have is running out of this scrumptious sprinkle too quickly #putitoneverything .