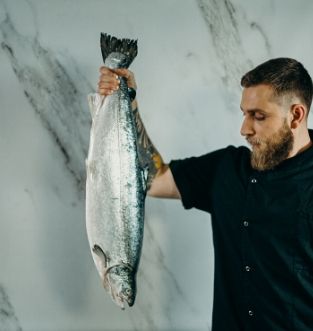 waste not, want not! Fin-to-Gill Eating

Although its 2020, we’re finally starting to get back to basics and ethical eating is on the rise. Gone are the days of simply cutting off a fillet and throwing the rest of the fish away. We’re seemingly more health conscious now than we have been in a long time and using the ‘offcuts’ in dishes is trending- and we have a strong inkling it’s a going to be a trend turned a permanent movement forward for our futures sake! Chefs are now serving up unusual and unique parts of animals in exquisite dishes that sound more odd and intrusive than they actually taste. Fin-to-Gill or Nose-to-Tail eating is leading people to embrace the lesser-used parts of animals and in turn encourages us to acquire a more exploratory palette (which we’re totally all for).

Western culture still tends to turn its nose up to the mention of offal and innards but we’re getting there… slowly. And so we should be, because the point of eating the majority of the animal quite literally will help us live a more sustainable life the more we embrace it. Sure it’s convenient to grab pack of four perfectly trimmed chicken breasts for your next stir fry… but just because its presented in shiny plastic, doesn’t mean we shouldn’t consider other (less pretty) parts of the same animal to cook with. Why should perfectly good parts of the animal be thrown in the bin just because we aren’t accustomed to eating them?

Sure, if you grew up eating offal, this kind of consumption will be obvious to you… but if you’re the picky kind who puts dibs on the chicken breast when buying a BBQ chook rather than those who will happily chew on chicken feet at yum cha, we’re talking to you so listen up! Less waste can only be a good thing, right? As it stands, even with this movement picking up and gradually trending, stats still suggest that  roughly one third of all food produced today is being chucked out rather than eaten. Eating the majority of the animal ensures that the resources that went into creating it in the first place are savoured rather than discarded.

If you want to try some unusual (and delectable) dishes of this kind, head on over to Chatswood Interchange where you can discover unique flavours and textures from adding tripe to your hotpot to chowing down on chicken heart skewers!