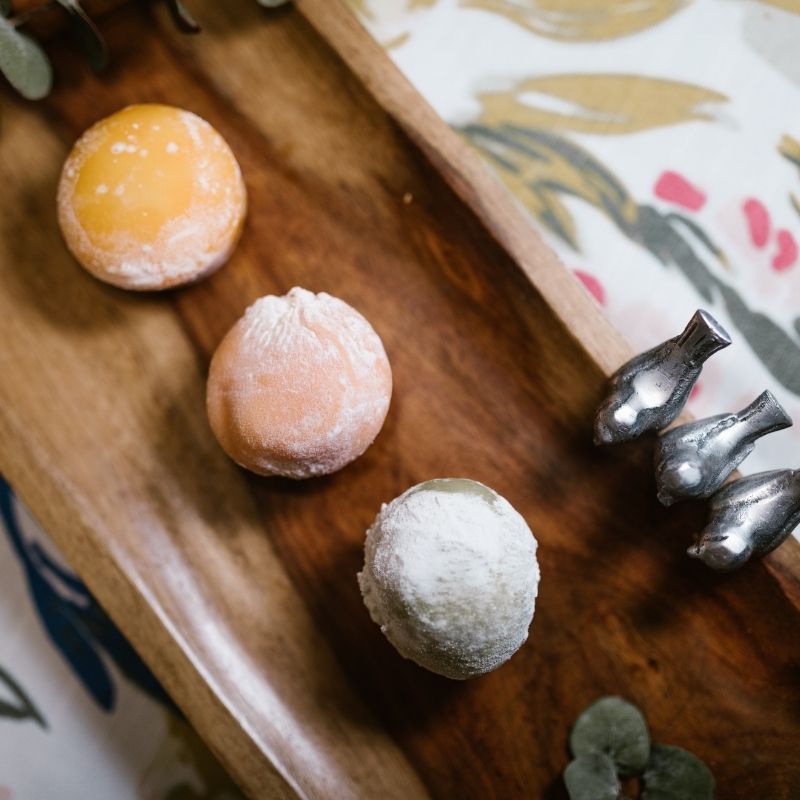 What the fork is mochi?

And why does this Japanese delicacy come with official annual health warnings?

When we previously wrote about Asian desserts, we got so many what the fork questions about mochi, we knew it deserved its very own piece.

Mochi are Japanese steamed glutinous rice cakes made by steaming and pounding sweet rice to a paste (or using powdered rice) before shaping into round balls. They’re often then filled with nuts, seeds or sweet bean mixtures – red adzuki beans are common. Mochi can be used in both sweet and savoury dishes and doesn’t stay fresh or soft for long so you need to cook it up fast so you can eat it again.

In Japan, mochi is traditionally made in a ceremony called mochi-tsuki. The ceremony takes place anywhere from December 25 to 28 in preparation for the new year. Once the mochi have been made, some are set aside as offerings to the divine. Known as Kagami Mochi (kagami meaning ‘mirror’ in Japanese), they look like a little snowman with two layers of round mochi crowned with a mandarin. The Japanese believe by placing two layers of mochi, their fortunes will be doubled.

Mochi can also be used in the New Year’s Ozoni soup, which is eaten for breakfast on New Year’s Day in Japan. The soup varies from region to region and even city to city.

Mochi by any other name

Mochi is versatile and can be made into a variety of different sweets. Often paired with matcha green tea, just a few common Japanese mochi are:

Now what about those health warnings?

Mochi are very chewy and sticky and should be eaten with care. If they’re not broken into bits and eaten carefully, they can get stuck in the throat which can lead to suffocation. Mochi are especially dangerous for those who cannot chew properly – such as the very young and the elderly – with Japanese media estimating that 90% of those taken to hospital from choking on mochi are over 65 years of age.

Every year in the run up to New Year celebrations, Japanese authorities issue health warnings to remind of the dangers of trying to eat mochi that isn’t broken down into smaller, bite size chunks.

Where can you get some mochi?

To feast on some delicious mochi, you need look no further than our very own Gram Café and Pancakes. Choose from mochi strawberry, chestnut or matcha. Okay and you may as well try the pancakes and French toast while you’re there. It’d be rude not to! You can also grab mochi to go at Asian City.