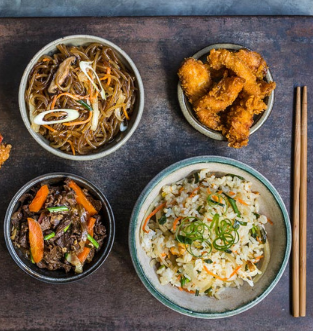 What the heck is a bibimbap?

It sounds a little something like that spell that Cinderella’s fairy Godmother casts upon her, but trust us.. bibimbap is no bippity boppity boo! Bibimbap is possibly the most well-known Korean dish and here’s a little clue as to what this dish is – the term ‘bibim’ means mixing various ingredients, while the ‘bap’ noun refers to rice. This delicious dish is made up of rice, sautéed veggies, chilli paste, soy bean paste, soya sauce and is often topped with kimchi (or similar fermented veggie) with the addition sliced beef and a raw or fried egg to finish. This hot dish is stirred together just before serving to combine all the flavours and textures into what becomes mouth-watering mouthfuls.

To make this dish even more appealing, each ingredient colour is said to represent and symbolize a part of the body. The dark coloured ingredients in the dish represent North and ‘the kidneys’. Orange and Reds in the dish represent South and the heart. White / West is represent lungs, and yellow ingredients represent the stomach centre. It is believed that this perfectly portioned combination of veggies, few carbohydrates topped with ferments, spice and protein makes for a hearty yet healthy meal full of everything your body needs from your north to your south and your east to your west.

Interestingly enough, bibimbap was believed to be dish consisting of a mix of leftover meals which were then combined and eaten together, in order to use up any food on the eve of the Lunar year. Think of it as a Korean ‘bubble and squeak’ – Clever right! If you’re keen to try a goodness bibimbap bowl then head on over to Tori Korean Street Food and try their authentic and amazing bibimbap dish cooked with love. Or if you’re feeling a little adventurous in the kitchen, why not head over to Woolworths and grab all the ingredients you’ll need under the one roof to create your very own bibimbap!